What is the spine?

The spine is a long column of 33 small back bones called vertebrae that are connected together by strong fibrous ligaments and shock-absorbing fibrous discs. The spine is part of the skeleton.

The spine supports the weight of the body, allows the torso to move, anchors many of the muscles, and protects the spinal cord from damage. The spine is also called the vertebral column, spinal column, or backbone. 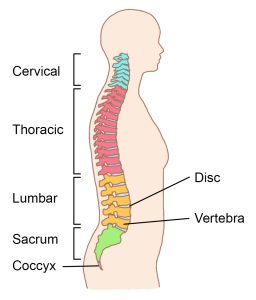 The five major areas of the spine.1

Areas of the spine:

The spine has a hollow canal in its centre that runs the length of the spine from the base of the skull down to the sacrum called the spinal canal. The spinal canal contains the spinal cord.

Naming the bones of the spine

The bones of the spine are named and numbered according to:

For example, the bone at the top of the lumbar area of the spine (the low back) is called the ‘first lumbar vertebra’ or ‘L1’.

What is the spinal cord? 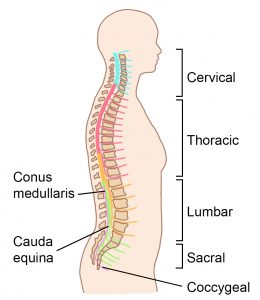 The spinal cord is divided into 31 segments, which each give rise to a pair of spinal nerves.3

The spinal cord is a long bundle of nerve tissue that is located in the spine. It is the main pathway for nerve signals travelling between the brain and the rest of the body. It is also the centre for the body’s reflexes.

The path of the spinal cord 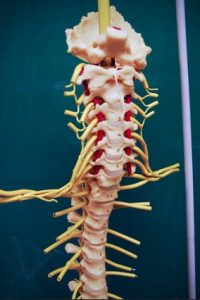 Spinal nerves extending from the spine.4

The spinal cord is divided into 31 nerve segments from top to bottom:

Each segment is a part of the spinal cord that gives rise to a pair of spinal nerves (one right and one left). The spinal nerves exit the spine through archways between the bones and continue outward to become the nerves of the arms, legs, and body.

How does the spinal cord work?

The spinal cord is part of the nervous system. The nervous system is the body’s main communication system. It allows messages to be passed from one area of the body to another. This is possible because of special cells called neurons. 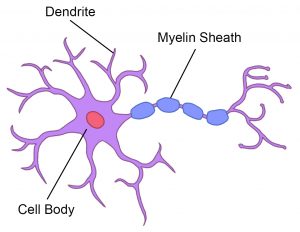 Neurons are cells that transmit nerve signals in the body.5

Neurons are the main cells of the nervous system. Neurons generate, conduct, and pass along nerve signals within the nerves, spinal cord, and brain.

Neurons communicate with other cells (such as other neurons, muscle cells and sensory receptors) through connections called synapses. These connections allow the cells to pass electrical and chemical nerve signals to other cells.

The main functions of the spinal cord are to pass along information related to movement, sensation, reflexes, and organ function. 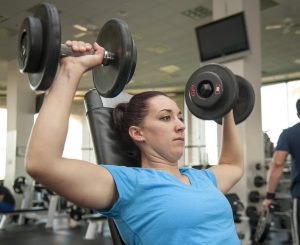 Movement begins in special movement (motor) areas of the brain that plan and generate nerve signals to create movements. Motor neurons from this area of the brain have long nerve fibers (axons) that project down the spinal cord, where they pass their signals to other neurons that travel out of the spinal cord and into the body. These neurons connect with muscle cells to pass along movement commands that tell the muscles to contract.

The spinal cord is also a pathway for sensations traveling from the body to the brain. This is called sensory function. Neurons that send sensory information are called sensory neurons.

The body’s tissues (like the skin, muscles, and organs) contain special sensory receptors. Sensory receptors detect sensations such as touch, pressure, vibration, or temperature. When a sensation is detected, a signal is sent along the nerve fiber (axon) of a sensory neuron to the spinal cord.

The signal then travels up the spinal cord where it is passed along to other neurons in the brainstem and brain. When these signals reach the sensation centers in the brain, they are interpreted and the person feels the sensation. 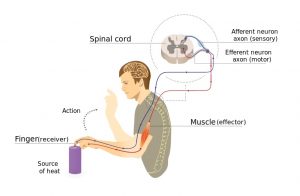 Pain signals from touching something hot travels to the spinal cord and back to the muscles without going to the brain first.7

Reflexes are automatic responses that happen in the spinal cord and do not travel to the brain first. For example, when the tendon below the knee cap is tapped, it causes the knee jerk reflex.

The spinal cord also plays a role in controlling some of the functions of the internal organs through the autonomic nervous system.

It has two divisions:

The sympathetic and parasympathetic systems have different (and often opposite) effects on the organs and work together to control bodily functions according to the situation.

Neurons that control the function of the autonomic nervous system begin in the brain or brainstem. Some of these neurons leave in the cranial nerves (nerves that arise directly from the brain and brainstem), and the rest travel down the spinal cord, where they branch from certain areas:

After leaving the spinal cord, the neurons connect (synapse) with other neurons in clusters of nerve cells called ganglia. From these ganglia, motor neurons project out to the organs and signal changes to their function.

Disclaimer: This document does not provide medical advice. This information is provided for educational purposes only. Consult a qualified health professional for further information or specific medical advice. The SCIRE Project, its partners and collaborators disclaim any liability to any party for any loss or damage by errors or omissions in this publication.